A short, rather plump and yes, one has to be honest, a pompous little man Captain Lloyd was always referred to by his nick names, his contemporaries knew him as ‘Batchy’ Lloyd, more junior staff as ‘Logger’ Lloyd.

This last was thought by many to refer to the daily line of defaulters outside his cabin who would invariably be fined one days pay, ‘Logger’ was not a man to let anything pass unnoticed.   But his bark was very much worse than his bite, much of his reputation was based on hearsay and in truth he was a very kindly man who ran a good and very happy ship and he was very well thought of by the passengers.

The nickname of ‘Logger’ originated from when he was Chief Officer.

The mate had to copy out by hand the ship’s deck log book which was then sent to head office at the end of the voyage. ‘Logger’ had the most incredible hand writing, best described as ‘old English’, and what is more he was reputed to be completely ambidextrous with it. Add to this his use of a different coloured ink for almost every occasion and his log books became works of art, I wonder if any survived?

As Master of the ‘Winchester Castle’ I grew to greatly respect him, perhaps we 4th's were biased.   ‘Logger’ appeared to have a soft spot for 4th mates and chose to overlook many a transgression of the Company’s strict ‘off deck by 10 o’clock’ rule which applied to all junior officers.

He was a well known lover of cats, the ‘Winchester Castle’ when he was Master had so many that eventually the officers decided enough was enough after one of them decided a settee in the 1st class lounge made a good maternity bed.

‘Logger’ would not hear of any being either put on other ships, ashore or destroyed but reluctantly he agreed to call a vet on board in Cape Town and the tom cats joined the trebles.

Captain Lloyd was a keen and very well respected amateur photographer, in port he went ashore with two cameras slung around his neck, one for colour the other black and white. In the evening before going ashore Logger always handed his cabin key to the junior officer on watch, he expected to be met at the gangway with it upon his return.   Always a nerve wracking business keeping lookout around the time he usually returned on board, then the frantic dash to the gangway he chose to use that night. It was his little joke to leave us guessing which one he would use, crew, first or tourist class.

One evening in Port Elizabeth I had put my money on the first class only to see him go past towards the tourist gangway, I made a dash aft and, skidding round the corner called to the quartermaster on duty “The old man’s coming”.  A voice floated back from the other side “Too late, he’s come” as Logger chuckled his way to his quarters   On another occasion a 4th officer who had enjoyed a convivial evening found himself un-expectantly in charge of the key, ‘Logger’ having stayed ashore much later than usual. Determined to be ready with it he stationed himself outside the Master’s door, key in hand, sleep got the better of him and he had slid down the bulkhead key still in hand.  When Lloyd returned, he carefully stepped over the recumbent 4th, gently removed the key making sure he did not disturb his sleep!

But to return to ‘Logger’s hand writing, every morning it was the job of the junior fourth on the four to eight watch to take to his cabin the deck log and night order book.   The former for ‘Logger’ to peruse, any bad handwriting, the incorrect coloured ink or horror of horrors an error crossed out called for the guilty party to receive a good telling off.   The latter for ‘Logger’ to tidy up!

Captain Lloyd was not one of the masters who went out of his way to woo all the passengers, I suspect with the aid of the purser, Mr. Atkins ‘Logger’ chose three men from the first class and would sit playing cards until the last of the whisky was poured from the bottle. Retiring to his cabin he would ’phone the bridge for the course, true and compass.   Before going on deck Lloyd had written his night orders only leaving the courses blank, these he now filled in.   In the morning he would ‘tidy them up’ as he was very careful not to allow any hint of anything more than a pleasant evening at cards.

Captain Lloyd always made sure he enjoyed his departures!   The days of ‘swinging the lead’ had long gone, by law all ships carried one on the bridge and the different materials or number of knots to mark the fathoms was one of the first things cadets learnt.   Upon sailing ‘Logger’ liked to see a quartermaster standing in the chains, a platform on the ship’s side for the purpose, line in hand; hopefully there would be an impressed and impressive number of passengers watching the charade.   As we crossed the bar, that is as the ship came close to the breakwater end ‘Logger’ would lean over the bridge wing and call below, ‘take the sounding quartermaster’.   This worthy man already primed by us as to what depth to call, would then make an impressive swing of the lead and call out the required depth, “by the deep eight”.   In truth it was just that, a charade for by this time the ship’s speed was far too great for the line to be swung and lead weight hit the bottom to get accurate sounding! But it kept ‘Logger’ happy.

The second little game played by ‘Logger’ only years later when I was a pilot myself did I understand just how potentially disastrous it could have been.  When the breakwater end was abeam ‘Logger’ would stop the starboard (or if appropriate port) engine to try to turn as closely to the breakwater as he could.  It was a pointless bit of bravado but all the mail ship masters engaged in one form or another of trying to impress the passengers, it was all part of the job. 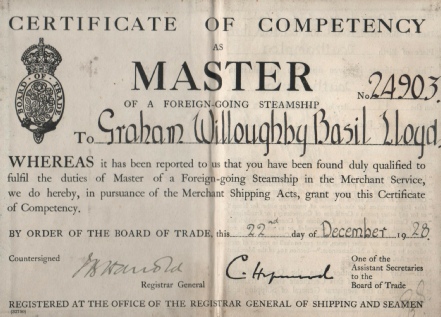 He was educated at Clifton School, Bristol and Gorse Cliff School, Bournemouth from whence he joined Conway in 1916

On leaving Conway he joined The Union-Castle Line as a cadet and except for a brief spell with Elder Dempster Line early in his career, spent all his working life on the “Castle “ ships.

He saw war service on Atlantic convoys and on hospital ships in the Mediterranean, taking part in the North African and Italian landings.

He received his first command in 1945 and commanded many of the well known Union-Castle Line liners, notably the Edinburgh, Winchester and Pendennis Castles.

A keen amateur photographer and animal lover, he retired in 1965 and spent a long and happy retirement with his family in Bournemouth.

To his wife, two sons and a daughter, we send deepest sympathy. 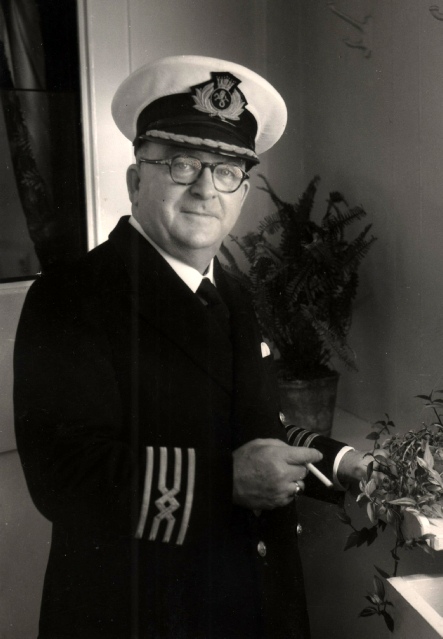