The Hollybrook Memorial commemorates by name almost 1,900 servicemen and women of the Commonwealth land and air forces* whose graves are not known, many of whom were lost in transports or other vessels torpedoed or mined in home waters (*Officers and men of the Commonwealth's navies who have no grave but the sea are commemorated on memorials elsewhere). The memorial also bears the names of those who were lost or buried at sea, or who died at home but whose bodies could not be recovered for burial. Almost one third of the names on the memorial are those of officers and men of the South African Native Labour Corps, who died when the troop transport Mendi sank in the Channel following a collision on 21 February 1917. Other vessels sunk with significant loss of life were:

HS Anglia, a hospital ship sunk by mine off Dover on 17 November 1915.

SS Citta Di Palermo, an Italian transport carrying Commonwealth troops, sunk by mine off Brindisi on 8 January 1916. In rescuing survivors, two Royal Naval Otranto drifters were themselves mined and blown up.

HMTs Donegal and Warilda, ambulance transports torpedoed and sunk between Le Havre and Southampton on 17 April 1917 and 3 August 1918.

HS Glenart Castle, a hospital ship torpedoed and sunk off Lundy on 26 February 1918.

SS Galway Castle, torpedoed and sunk in the Atlantic on 12 September 1918.

RMS Leinster, the Irish mail boat, torpedoed and sunk in the Irish Sea on 10 October 1918.

Among those commemorated on the Hollybrook Memorial is Field Marshall Lord Kitchener, Secretary of State for War, who died when the battle cruiser HMS Hampshire was mined and sunk off Scapa Flow on 5 June 1916.

(There were 14 members of the Indian Forces commemorated here who are now known to have been cremated at Patcham Down, Sussex, and are now commemorated on a dedicated memorial there).

The memorial was designed by T. Newham and unveiled by Sir William Robertson on 10 December 1930. 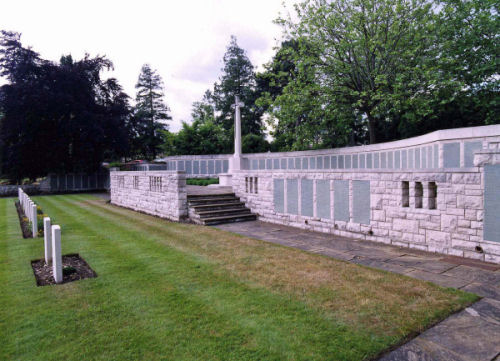 The Hollybrook Memorial is situated in Southampton (Hollybrook) Cemetery behind the plot of First World War graves near the main entrance. The cemetery is located off Tremona Road, opposite the general Accident & Emergency Hospital. From junction 5 of the M27, take the A35 (Burgess Road/Winchester Road) and follow the signs for the general hospital.

A Visitor Information Panel was recently installed at Southampton (Hollybrook) Cemetery to provide information about the war casualties buried and commemorated here. These panels are being erected to help raise awareness of First and Second World War graves in the UK (Feb 2013).