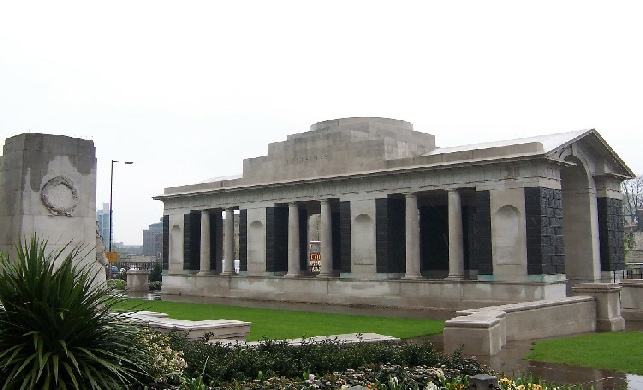 The Tower Hill Memorial is a national war memorial on the south side of Trinity Square Gardens, just to the north of the Tower of London. It commemorates those from the Merchant Navy and fishing fleets who died during both world wars and have no known grave.

The World War I memorial takes the form of a vaulted corridor, 21.5 metres long, 7 metres wide and 7 to 10 metres high. Inside are 12 bronze plaques engraved with 12,000 names. It was opened by Queen Mary on 12 December 1928. The World War II memorial takes the form of a semi-circular sunken garden located behind the corridor, to its north. It contains the names of 24,000 British seamen and 50 Australian seamen, listed on the walls of the sunken garden. In the centre of the garden is a pool of bronze, engraved with a compass pointing north. The WWI memorial was designed by Edwin Lutyens and the WWII memorial by Edward Maufe.

Between the two memorials are two columns with statues representing an officer (western column) and a seaman (eastern). This was designed by Charles Wheeler. The second part of the memorial was opened by Queen Elizabeth II on 5 November 1955.

The main inscription, located in between the two columns, reads

THE TWENTY-FOUR THOUSAND OF THE MERCHANT NAVY AND FISHING FLEETS WHOSE NAMES ARE HONOURED ON THE WALLS OF THIS GARDEN GAVE THEIR LIVES FOR THEIR COUNTRY AND HAVE NO GRAVE BUT THE SEA.