The following is from Bren Shackleton on 19th February 2007

Started his Sea Searvice as a Deck Boy with Union-Castle and finished as Master of the Rescue Ship GOODWIN.

May I add that I well remember your father,  not least for his invariable courtesy to relatively junior officers. 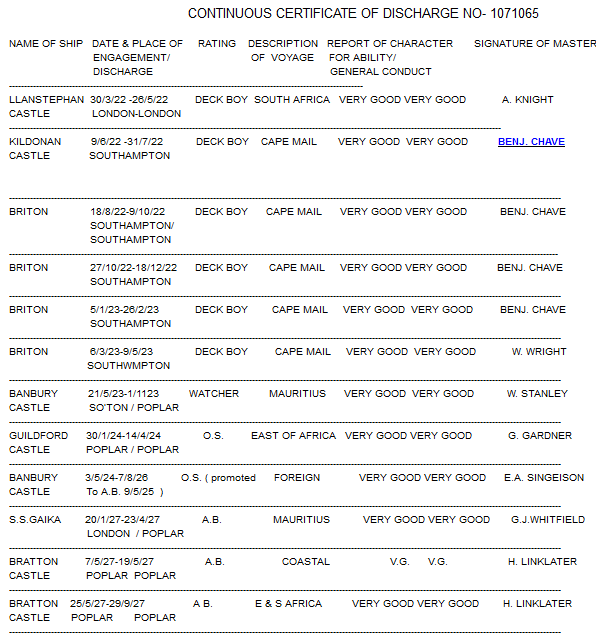 I hope that this is the kind of info' that you are looking for. If you go to the BBC History page and type in RESCUE SHIPS CAPTAIN HARTLEY you will probably get the profile that I did of him a couple of years ago.

I've looked at your site this evening and I'm pleased you were able to use so much.

Dad was unemployed for 3 years 4 months from May 31- Sept 34 when he joined the Clyde Shipping Company  ( SS ROCKABILL ) as 2nd Mate.

I remember him saying that he went for interview with 5 others in South Wales .The Chief Superintendent - or whoever it was - asked each in turn where they served.

This meant which Shipping Company had they been with as cadets ( Junior Officers ) Each man named the Company and all the time Dad was thinking ,"Crumbs, I've had it!" When Dad was asked, he answered that he had not served with a Company but had been ' before the mast'. "So, Hartley, you came up the hard way. You've got the job."

The following is from the BBC HISTORY PAGE web site,

The concept of a Rescue ship came about in 1940 when Sir Max Horton (Commander- in- Chief Western Approaches ) first suggested it to the Admiralty. The principal task of this ship was to save the lives of Seamen whose ships were sunk by enemy action. Also to provide succour, care and comfort and any Surgical, medical or other treatment that might be necessary.

Ships are soon replaced but not the lives of skilled seamen. The Admiralty looked for vessels that were small and easily manoeuvrable with a good speed. They were to sail at the rear of a Convoy and to pick up survivors from the sea. These ships were used in peacetime for coast-wise passenger traffic and many were drawn from the Clyde Shipping Company.

They were not Built to serve in the Atlantic nor the Arctic but were required to be sound and seaworthy. No rescue ship was lost in an Atlantic storm, although one was iced-up and foundered off the coast of Newfoundland. The ships were manned by Merchant Navy Masters, Officers and Seamen for the duration of the War. This was important because the Rescue Ship could work independently during an attack and move immediately to the rescue of the ship-wrecked without prompting or orders from the Admiralty

The first Rescue Ship was the BEACHY and my father, BILL HARTLEY, was the Chief Officer. In January 1941 the BEACHY was attacked by a German Foche-Wulf Condor 200 bomber west of Ireland. Dad then joined the RATHLIN and then COPELAND in July 1942 and was promoted Master of this vessel in August 1942.

On his first command he was ordered to North Russia in Convoy PQ18; one of the most heavily attacked Convoys of the war. During almost continuous attacks over 5 days , COPELAND was officially credited with shooting down one enemy bomber and damaging several others . In circumstances of great difficulty and danger , his vessel picked up 205 survivors sunk by enemy action.

" Vessel was called upon to transfer a badly wounded American to hospital on board, but owing to the attacks it was quite impossible to stop the ship so CAPTAIN HARTLEY decided to run his own vessel alongside the American ( USS PATRICK HENRY ) at 10 knots and succeeded in transferring the patient in this manner; a feat that entailed seamanship of the highest order.

For his courage and service in PQ18, CAPTAIN HARTLEY was awarded the D.S.C and Lloyds Medal for bravery at Sea."

The COPELAND then went to Halifax for her next 4 voyages ( the rescue of the SS Aymeric in May 1943 ) and then Gibraltar, then another trip to Murmansk ( N. Russia ) and then Gib. again before Dad joined the GOODWIN as Master in February 1944.

In April 1944 the crew of the Norwegian SOUTH AMERICA were rescued. This tanker was torpedoed by U-302 and immediately burst into flames masthead high. Dad decided that the only way to save the crew was to go alongside aft of the burning vessel. When GOODWIN was 70 yards astern the tanker was hit by a second torpedo, which had the effect of quenching the fire. GOODWIN stopped about 40 feet astern and all 42 crew were rescued in 37 minutes.

The sequel to this story is that I made contact with a Radio Officer, Robbie Roberts, from the GOODWIN via a Merchant Navy website. 10 years ago he had met up with one of the rescued Radio Officers from the SOUTH AMERICA, Bob Cobb. In two weeks ( end of May 05 ) the Captain's daughter ( me ) and the 2 Radio Officers are meeting. Dad died 6 years ago and in a few days time we, as a family, will celebrate what would have been his 100th birthday. To find someone whose life he saved is a wonderful present for us all.

He never mentioned any of the horrors of the war; just things that were funny. When he referred to his War Service he always said, "I thank God that I was in the business of saving lives and not taking them." 362 survivors have reason to be thankful to him. 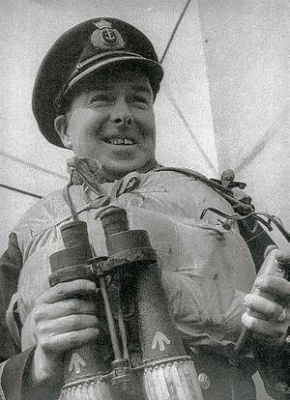