Early thirties young Roy experienced the worst aspect of the Depression, certificated officers having to sail as deck crew. During this period, met and married Alice in Cardiff, then had the daunting experience of running the blockade in "Potato Jones’" ships to Barcelona during the Spanish Civil War.

Early in WW2 Roy joined Bullard & King and this ensured his sailing would take him to South Africa and he made steady progress to master. Roy was a well-loved and respected captain. 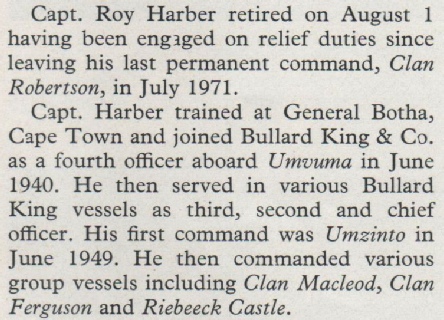 He was made a liveryman of the Honourable Company Master Mariners in London and was long standing member of the GBOBA, which was dearest to his heart. In his memory his daughter Liz Hodes in Cape Town has carried on the tradition.

In retirement with Alice, joined his son "Young Roy" and wife Jean in Rockingham, Western Australia.

His home "The Anchorage" and the watering hole "Harber Inn" housed many of his artefacts collected from all parts of the globe and the yarns only Old Roy could tell!