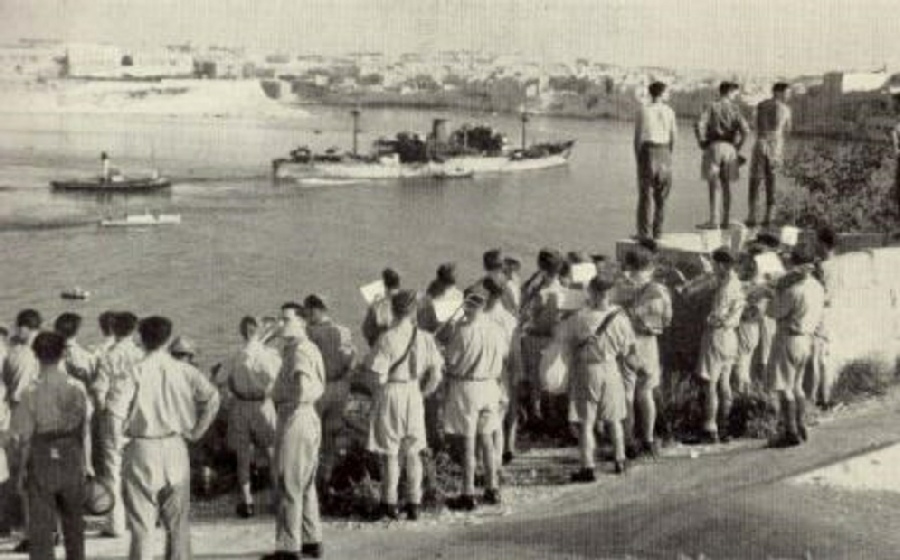 The story of the epic and heroic struggle to reach Malta

is told on Rochester Castle’s page.

Fondazzjoni Wirt Artna is honoured to have been entrusted with the preservation and display for posterity of the original red ensign of M.V. Rochester Castle

The Red Ensign was donated by Shirley Richmond widow of Bill Richmond who was the Third–Officer on the Rochester Castle when it sailed into Malta in August 1942 and who had kept it ever since in his possession as a memento. Mrs Richmond has also donated a Royal Navy Reserve officers’ sword belonging to Bill’s father who took part in the Battle of Jutland 1916.

Clan Ferguson entering Valetta on an earlier convoy in January 1942

On the 12th August 1942 she was sunk by aerial bombs and torpedoes.

The crew including 8 Navy and 12 Army gunners numbered 101. There were 13 passengers also aboard.

The Second Officer, Arthur Haddington Black, DSM, made a survivor's report which states one lifeboat got away with 50 people on board, the remainder were on rafts. On daybreak his raft spotted 3 other rafts and when all were rounded up they counted a total of 64 men, the lifeboat with the other 50 was not there.

Of the 64, 32 were transferred to a German flying boat which landed beside them on 13th August. On the 14th August the remainder set a course for the North African coast in spite of the fact that it was in Vichy hands.

An Italian Red Cross plane landed beside them on the evening of the 14th and 7 men were transferred to the plane.

Two of the rafts landed ashore on the 16th August and were handed over to the authorities. 2/O Black was also surprised to see the third officer [who was in the lifeboat] which indicates the lifeboat with the other 50 landed ashore first.

It would appear that some of them including the second officer were able to escape.