FINDING of the Court of Inquiry concerning the circumstances attending the wreck on Robben Island on the afternoon of the 7th day of May, 1901, of the British registered ship "TANTALLON CASTLE," held in the Oddfellows' Hall, Loop Street, Cape Town, the 23rd day of May, 1901.

The Court was composed of:

GEORGE BLACKSTONE WILLIAMS, Acting Resident Magistrate of the District of the Cape (President);

The R.M.S. "Tantallon Castle" left Southampton on the 20th day of April, 1901, and Madeira on the 24th day of April for Cape Town. The ship appears to have been properly manned and well found. All went well until the morning of the 7th day of May, when at 3.39 the ship came into patches of fog. At 4 a.m. the fog cleared, and at 6 a.m. the ship's position was determined by stellar observation, the weather being then bright and clear, and it placed the ship in latitude 32° 24' S. and longitude 16° 39' E., which gave the course made good from the previous noon S. 41 1/4° E., true distance 263 miles, compass error 31° W. on a course S. 10° E. This placed the ship three miles ahead of the position by dead reckoning. About 6.20 a.m. the ship ran into a fog bank. The wind being light and variable, the speed was increased and reduced according to the conditions of the weather; soundings appear to have been taken with sufficient regularity until 2 p.m., when 57 fathoms were found. After that time, however having regard to the then assumed position of the ship and the state of the weather, we are of opinion that soundings should have been taken more frequently. Soundings were taken again at 2.30, when 42 fathoms were found, and at 3.05, when 40 fathoms were found, the ship taking the ground at the north-west of Robben Island at 3.16. In our opinion, when 42 fathoms were obtained, the ship's head should have been put to the westward and the vessel stopped at any rate at that time, if not at an earlier stage. We are further convinced in this opinion, considering the charts available for approaching the coast have not sufficient soundings shown to be a safe guide for navigating in a fog. After the ship struck perfect discipline was maintained, and everything possible was done for the safety of the passengers and crew, and every endeavour was made to refloat the ship by the use of her own engines, no other means being then available.

In conclusion, we are of opinion that the master was guilty of a grave error of judgment in not putting the ship's head to the westward and stopping her when 42 fathoms were found. This we consider calls for the censure of the Court, but does not justify us in dealing with his certificate. which is returned to him, especially having regard to his long and meritorious record. We are of opinion that no blame attaches to the other officers.

The Court desires to draw the attention of the Government to the urgent necessity of placing fog signals on Robben Island, and other dangerous points along the coast.

1901 May 7th.  In the early hours of the morning when southbound and approaching Cape Town the Tantallon ran into thick fog which temporarily lifted for an hour or so at 10.00 hrs.

The Tantallon was overtaking a ship whose distance ahead was unknown, during the clear period this ship being overtaken was seen to be 5 miles to seaward. Again in fog a masthead lookout reported being able to see Cape Town ahead above the level of the fog bank.   Speed had been reduced to some 4.5 kts when at 1520 hrs a slight grounding noise was heard and the Tantallon was aground.

She had grounded on Robben Island and at first hopes were high to refloat her. All the passengers were safely got away in boats and by way of a small local steamer taken to Cape Town.

Three ships, the Braemar, Avondale and Raglan Castles tried to refloat her without success, in the following days the weather worsened and in the heightened seas the Tantallon Castle broke up.

Built for the mail service she was the company's first vessel to be fitted with a quadruple expansion engine and considered to be a single funnelled version of the Dunottar Castle.

In May 1895 she carried a record 384 passengers on her homeward voyage and in the June cruised with Mr & Mrs W.E Gladstone on board to the opening of the Hamburg - Copenhagen - Kiel Canal. Although named by Emporer Wilhelm II as the Kaiser Wilhelm Kanal it is always referred to as the Kiel Canal.

One of the invitees for that cruise was none other than one of Sir Donald’s principal rivals Charles W Cayzer MP.  Little did they know then the impact that future generations of the Cayzer family would have on the fortunes of Union-Castle Line.

Cayzer refused the invitation and to further snub Currie’s antics, invited many of his parliamentary colleagues to join him on a similar cruise aboard Clan Matheson (1). 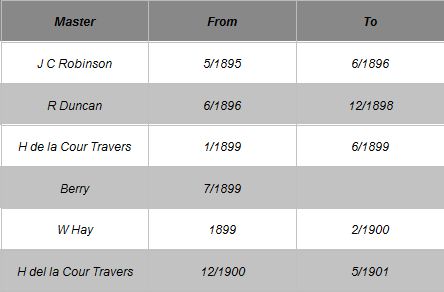 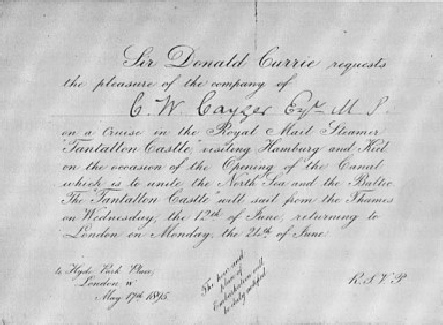 “Sir Donald Currie requests the pleasure of the company of C.W. Cayzer Esq MP on a cruise in the Royal Mail Steamer Tantallon Castle visiting Hamburg and Keil, on the occasion of the Opening of the Canal which is to unite the North Sea and the Baltic. The Tantallon Castle will sail from the Thames on Wednesday, the 12th of June returning to London on Monday, the 24th of June.” 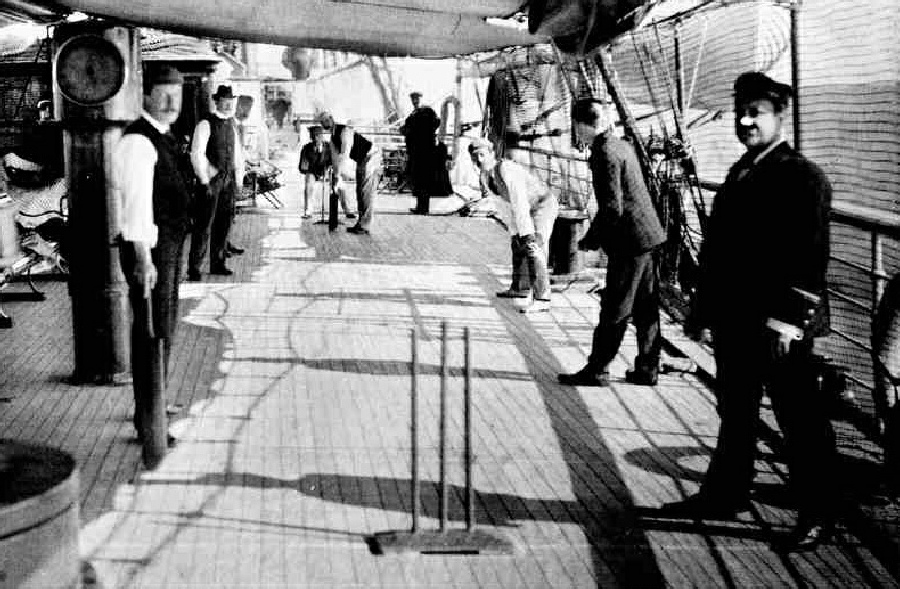 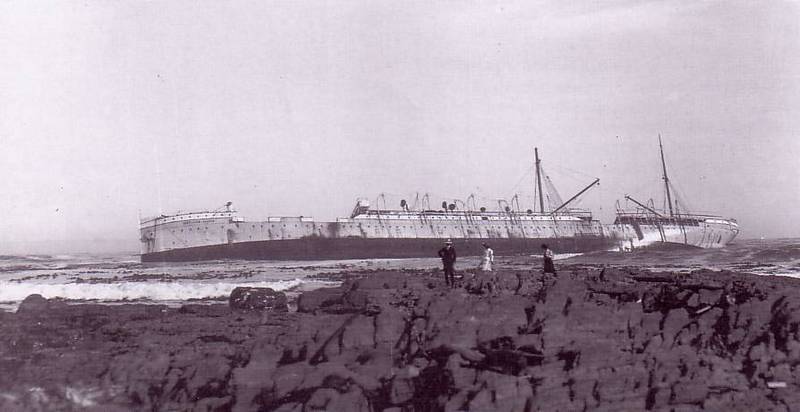 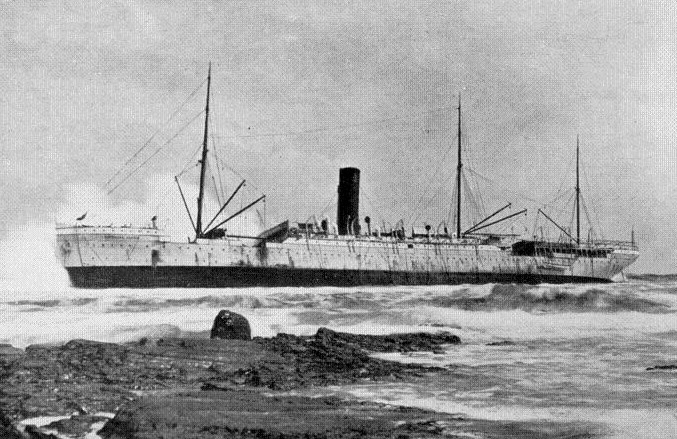 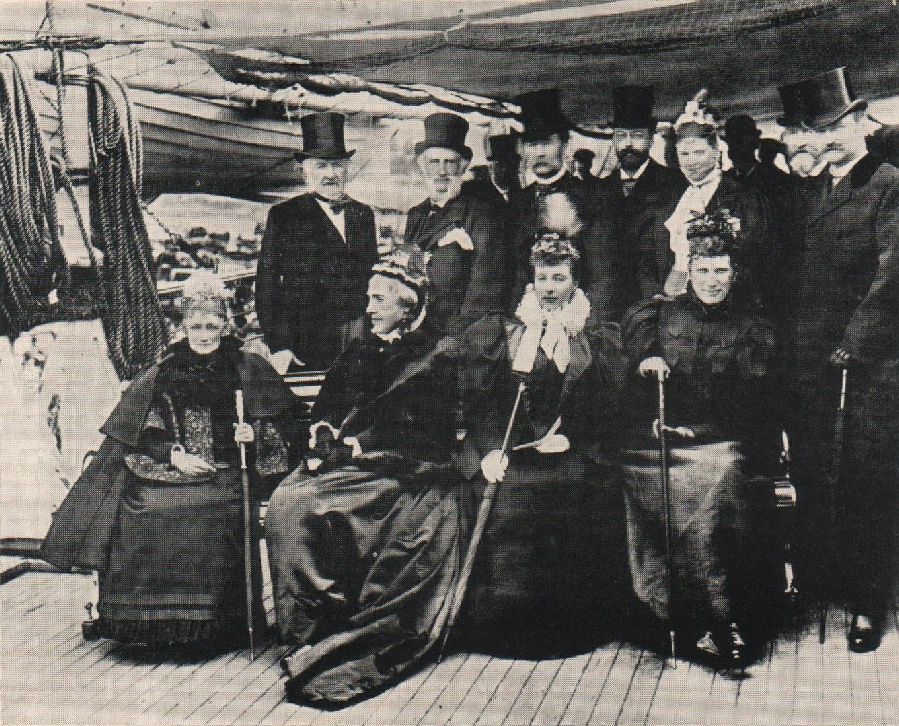 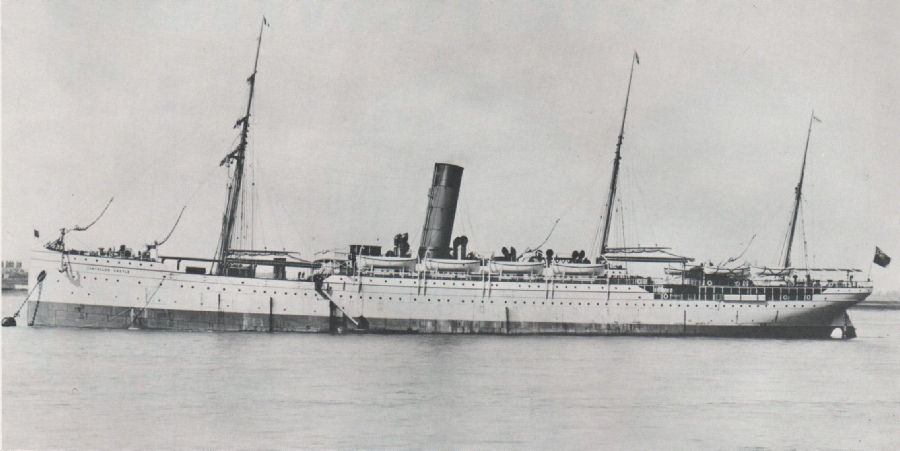