The "Walmer Castle" was requisitioned in 1940 for use as a convoy rescue ship for which she was ideally suited.   Fast and manoeuvrable her task was to pick up survivors from torpedoed ships in the convoy.

'It was in September, 1941, and the Walmer Castle, commanded by Captain Gerald Clarke, was accompanying a Gibraltar convoy.   The position was some 700 miles west of Ushant.   The convoy had been heavily attacked and the Walmer Castle had picked up a number of survivors.   Late on Saturday night, September 20th, it was learned two more vessels had been torpedoed,  and just before midnight the Walmer Castle was able to rescue fifty-eight men from the Empire Moat and Baltallinn.   The convoy, meanwhile, was continuing on its way.   Captain Clarke, of the Walmer Castle hoped to overtake it and rejoin by 9 o'clock next morning, but when daylight came there was no sign of the other vessels.

At twelve knots the Walmer Castle proceeded on her zig-zag course, until suddenly, at 11.55 a.m., an enemy aircraft was seen directly ahead rapidly approaching from the west.   Action stations was immediately sounded and fire was opened before the enemy was overhead.   The aircraft swooped down, in a fore and aft line, over the Walmer Castle, but the captain put the helm hard over, and the first bomb fell into the sea.   A second attack soon followed.

On the bridge of the Walmer Castle, outside the wheel-house where Captain Clarke was conning his vessel, there was no protection.   Without thought of danger to himself the captain continued to give his orders, and once again the ship was swung so as to avoid the bombs that fell.   All this time the Walmer Castle was hitting back with her own defensive armament, while in reply the enemy opened fire with his rear gun after passing over.   Several of the Walmer Castle's crew were killed, some in circumstances of great heroism.   The cook lost his life saving the chief steward.   Bulets were flying down the alleyway as the chief steward came out of his cabin, but the cook, Herbert Hill, threw himself in front of his ship-mate to push him out of danger.   Meanwhile, the first radio officer, Mr F.W.T. McGowan, had sent out the distress message before his set was wrecked.   When bombs began to hit the vessel he was trapped in his cabin with three other men.   As soon as the blast had cleared he removed the debris and forced his way out.   He returned three times, to release the others, two of whom were badly hurt, and by his efforts alone were they dragged to safety.

The enemy came in for a third attack, and this time the captain was badly wounded.   Although hit in the stomach  by a bullet he nevertheless remained at his post on the bridge.   Now the aircraft flew in for a fourth time.   This time a bomb shattered the starboard wing of the bridge, and Captain Clarke was killed immediately.   The bomb penetrated the engine room, wrecked the engines and putting the water services out of action.   The Walmer Castle had become an inferno.   Some idea of what then followed is best given by quoting from the report of the chief officer, Mr. A. Lawson:

'..........chief engineer escaped from engine room with severe burns and died later.   Third engineer, on duty below, lost.   Many survivors in fore 'tween decks killed by gunfire and blast; ladders, hatches and accommodation reduced to matchwood.

Remaining survivors and wounded were got on deck and placed on rafts and no.3 lifeboat.   Motorboat blown away, no.2 port lifeboat badly holed and foundered.

Fire raging throughout midships accommodation and on boat deck, effectively isolating fore end of ship from aft soon after bomb explosion.   Bridge searched for survivors, and accommodation above and below decks, as far as possible, fire having taken firm hold of port side and accommodation on starboard completely wrecked.   No.4 port boat badly holed and awash on launching.   Injured and some survivors taken away.   Two remaining rafts reserved for injured.   A. Davies, Bos'un, and J. Piccilliro, 2nd stewd Barrett, R.N. Gunner, together with 3rd officer, Mr. T.A. Morris, did excellent work getting injured men on to these rafts.   These cast off, with men in charge, as ship's plating was blistering with heat.   Thirteen men remained including two badly injured and one aged man.   I felt the wisest course in these circumstances was to remain on board as long as possible, having in mind also, that only one buoyancy float remained.   This we did, commending ourselves to God and wetting down the poop deck from time to time to prevent it firing.'

Later the corvette Marigold and sloop Deptford arrived.   Marigold took off the remaining thirteen survivors, the white hot hulk that had been the Walmer Castle was sunk by gunfire. 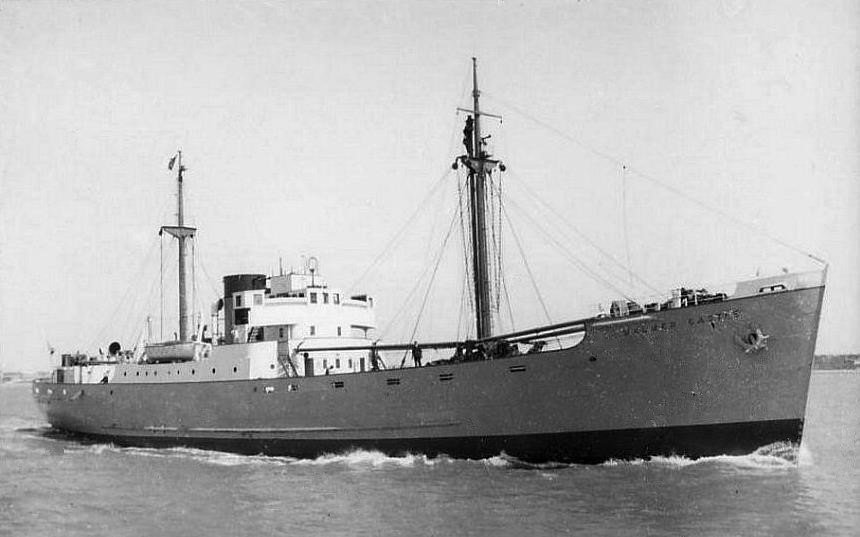 She was delivered on 30th November 1936 to replace the Eider on the Southampton - Bremen - Hamburg feeder service.

One of her 'duties' was to give budding marine superintendents command experience.  (Possibly the Company did not trust them on anything larger!)

In 1940 she was requisitioned for use as an armed supply ship based at Scapa Flow and in June 1941 was converted into a convoy rescue ship.

She became operational on 12th September 1941, replacing the Hontestroom which had unsatisfactory accommodation.

On 19th September she began her first tour of duty with OG 75 and rescued 23 crew members of the City of Waterford.

On the following day she rescued 30 seamen from the Empire Moat and 28 from the Baltallin.

During the next day, 21st September, and well astern of the convoy, she was attacked out of the sun by a Focke Wulf Kondor of I/KG 40 from Bordeaux, some 700 miles west of Ushant.

She managed to dodge two bombs but a third scored a direct hit killing the captain, 10 of the crew and 2 of the rescued seamen.

The remaining 12 crew members and 52 rescued survivors were picked up by HMS Marigold and HMS Deptford and the derelict hulk was sunk by gunfire. The Focke Wulf was later shot down by aircraft from the escort carrier.

Convoy OG 75 was attacked by a wolf-pack and lost nine ships despite the fact that the very first escort carrier, HMS Audacity, was present.

It later transpired that at the beginning of September 1941 the German command changed its grid references code but it took British de-coders several days to break the code.

The presence of a wolf-pack was predicted but the exact location and time of attack could not be established in time.

Bombed and Sunk in The North Atlantic - 1941