‘Billy' Byles was one of the most popular as well as being a very good master. Popular with passengers, officers and crew alike.   Captain Byles had the distinction with my father Captain C.S.G. Keen, they were great friends, of being the only two officers in the 'old' Union-Castle to hold their Extra Master's certificates.

I am sure all those who sailed with Billy will remember his daily chat to the ship, 'Breakfast with Byles' we called it, he had a wonderful turn of phrase, whales and large fish were 'denizens of the deep!  (For those without the O.E.D. at hand it translates as 'citizens of the deep')

He was one of the most approachable of men.   I had a particular personal problem, my wife lived in South Africa and the Company would not allow me leave there, consequently we had only seen each other for all too brief stays in Cape Town.   I was appointed junior 2nd mate to the Capetown Castle, Captain Byles at the time in command.   Knowing that this would be my last voyage in the Company I decided to have Lynette, my wife book a passage to Durban and back to Cape Town in her maiden name.   At the time it was strictly forbidden for all other than very senior officers to have their wives on board.   There was a complication, our 18 month old son!

Outward bound I received a telegram to say all was arranged, but then I had doubts, it was sure to become known to the Company and would undoubtedly give Captain Byles a great deal of explaining to do.   I made a 'full confession' to the captain, expecting this to be the end of the 'grand plan'.   His reply was astonishing, one I will never forget.   "Thank goodness you told me young Keen, had you gone ahead it would have lead to disaster, leave it all to me."   Captain Byles was as good as his word, he squared things with the Cape Town manager, arranged for Lynette to have a cabin who's stewardess was close to his 'tiger' and whose discretion was assured and all was well.   I very much doubt if there was another master in the Company who would have gone to such lengths for one of his junior officers.

His days in command were not without their problems!   Billy along with all the other Mail Ship masters went out of his way to impress his adoring passengers. Entering Port Elizabeth one morning he passed so close to another vessel at anchor that he snagged her chain causing the vessel to run into the side of the "Carnarvon Castle".   Naturally everyone including the Company was very cross with Billy and he was put back to cargo ships for a voyage or two.   But nobody could keep him down for long and he retired as a well deserved Commodore.

Commodore W.S. BYLES, the first of the group's captains to have held the position of Commodore of the British & Commonwealth Fleet, retired at the end of September. His last voyage in Edinburgh Castle was marked by farewells at all ports of call and by a tremendous send-off from Cape Town when ships in port blew farewell signals on their sirens until the Edinburgh was well away from the docks.

Late arrival at Las Palmas caused the cancellation of a tele-film which the Spanish television company had arranged to make but an official reception was held on board at which presentations were made to the Commodore:  gifts included an oil painting, a silver salver and an outsize bottle of brandy reputed to contain a gallon.

A Yorkshireman by birth, Captain Byles was an immensely popular captain. Passengers remember him as a charming and friendly host with a profound knowledge of the ways of the sea.   His morning broadcasts, packed with information about the voyage and the running of the ship, became known affectionately throughout the fleet as 'Breakfast with Byles'.

He joined the Union-Castle Line as a cadet from H.M.S. Worcester in November 1922 and his first command in 1938 was to Rovuma. 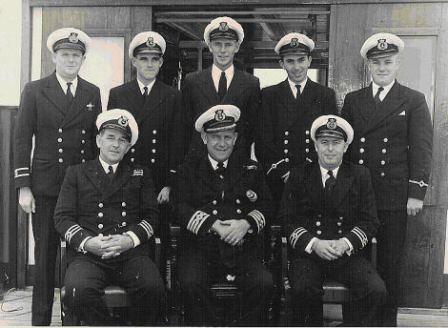 Mrs. Byles accompanied her husband on his last trip and saw him presented by staff commander R.D. Lofts, on behalf of the ship's company, with a silver tea service, Sheffield plate tureen and electric plate-warmer. 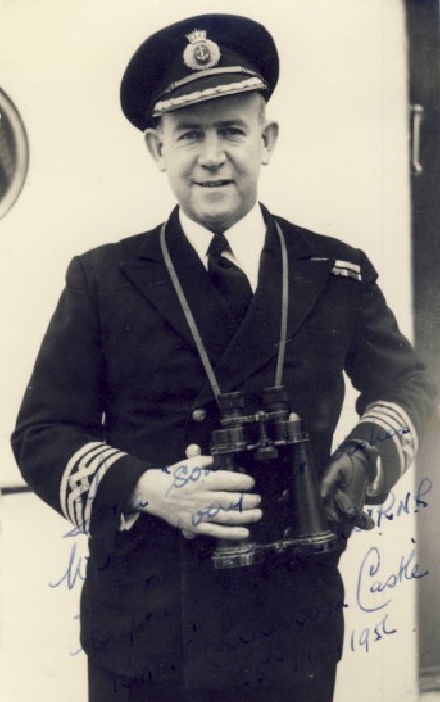 Our Congratulations are Extended to: 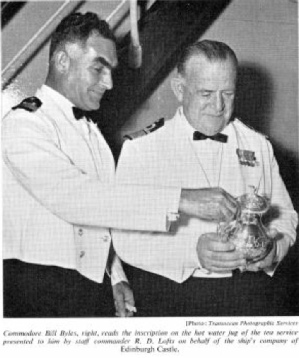 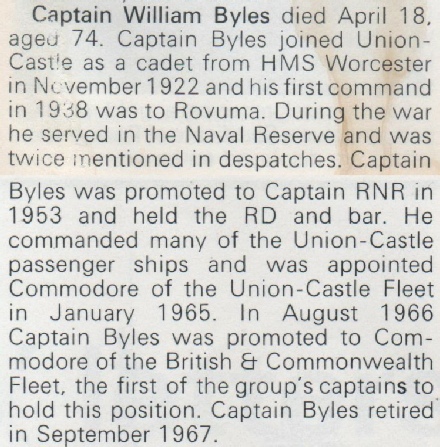