When she entered service in 1883 she was the largest ship calling at South African ports. During the Russian scare in May 1885 she carried troops to Hong Kong where she remained as a garrison ship until the crisis passed, returning to Cape Town in the July.

In November 1899 she was used to carry troops to South Africa during the Boer War.

On 5th April 1900, shortly after being transferred to Union-Castle, she sailed for Southampton with 102 passengers and the mail. When 80 miles north of Cape Town and proceeding slowly through dense fog she was in collision with Tatem's Winkfield and holed.

The passengers and mails were transferred to the Winkfield while attempts were made to plug the holes. Unfortunately, the ship continued to fill with water and by noon of the following day the captain and emergency crew abandoned the ship which sank within the hour.

She was the newly formed Union-Castle Line's first loss. 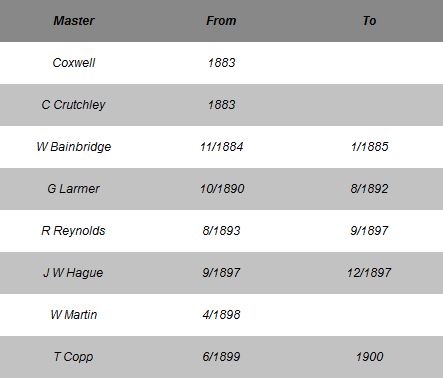 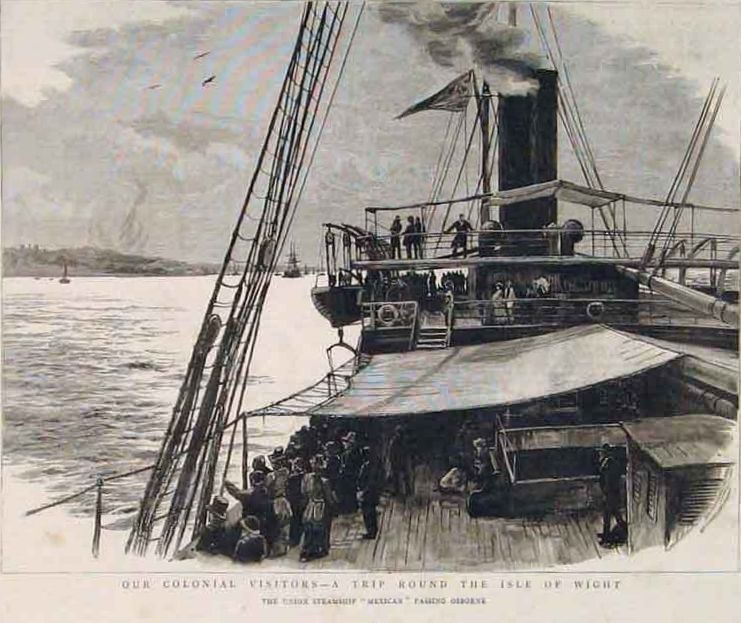 REPORT and Finding of a Court of Inquiry, held at Cape Town, before WILLIAM MARTIN FLEISCHER, Esq., Resident Magistrate for the District of the Cape, Captain THOMAS STEPHENS, Master of the s.s. "Aurania" (transport), and Captain SYDNEY ANDREW SMITH, Master of the s.s. "Craigneuk," to investigate the circumstances attending the collision between the s.s. "Winkfield" and the s.s. "Mexican," in the South Atlantic Ocean, on the 5th April, 1900.

The evidence shows that the "Mexican" was a steam vessel of about 3,000 tons, registered tonnage, official No. 86330, belonging to the Union Company, and employed as a mail steamer between Southampton and Cape Town.

At 11.0 p.m. the third officer reported to the captain that the weather was becoming hazy. The captain immediately proceeded to the bridge, and finding he could see a considerable distance, he kept the ship going at full speed until 11.30 p.m., when the haze thickened and he reduced speed. The whistle was sounded at proper intervals, and at midnight the third officer was relieved by the second officer, who, with the captain, kept the watch. The fog was patchy and it was possible to see some distance at one time, but not so well at another. This condition of the atmosphere remained until the collision.

The captain, supposing that the vessel whose light he had seen was bound for Cape Town, and expecting to see her green light opposed to his green light, ordered the helm hard astarboard to give each ship more room to pass, and he put the engines slow ahead, but before the engines could be started he saw the red light of the approaching vessel appear out of the fog, very close. The captain was of opinion that nothing could prevent the collision if the approaching vessel was travelling as fast as she appeared to be, but, in the hope that she might not be going so fast, he put the engines full speed ahead.

The order had scarcely been given when the approaching vessel struck the starboard side of the "Mexican," wrecking the starboard side of the bridge and penetrating the forward coal bunker. The captain thinks this was about a minute from the time he first saw the bright light, and only a few seconds from the time lie saw the red light, and approximately in latitude 33° 8' S., and longitude 17° 28' E.

The captain at once ordered all water-tight doors to be closed, all boats to be swung out, and got ready for receiving passengers, had the wells sounded, and all hands called to be in readiness. The carpenter having reported that the coal reserve and main bunker had 4 feet of water in them, which was rapidly increasing. The women and children were ordered into the boats, and were followed by the male passengers, all of whom were transferred to the "Winkfield," and 194 bags of mails out of 429 bags were saved.

At mid-day the chief engineer reported that the pumps could not keep the water down in the engine-room, and that it was rising fast. The captain thereupon proceeded to the "Winkfield" to consult her captain, taking those on board with him. After consultation with the captain of the "Winkfield," the captain of the "Mexican" returned with the chief and second officers and 25 men to prepare to tow the "Mexican." The tow-line was got on board, and the towing started at 4.0 p.m.

At 5.0 p.m. it was found that the bulkhead dividing the coal reserve from No. 2 cargo hold was bulging, and that there were 16 ft. of water in the stokehold and 16 ft. in the engine-room, and that the water was also up to the between decks in Nos. 3 and 4 compartments. The pumps had ceased working, and after consultation with the chief officer and chief engineer, the captain decided to leave the ship. This was done, and the "Mexican," after an unsuccessful attempt to get another hawser on board with the view of towing without anyone on board, was finally abandoned, and ultimately foundered.

The "Winkfield" is a steam vessel of 4,009 tons, registered tonnage, official No. 112669, belonging to Lauther, Latter, and Company, of London, employed as a Government transport, and left London on 14th March, 1900, for Cape Town, with troops and stores and a crew of 49 hands all told.

At 1.14 a.m., 5th April, 1900, in latitude 33° 01' S., and longitude 17° 29' E., the captain was awakened by the whistle blowing, and a moment afterwards was called by the second officer, who said it was coming on foggy. The captain went on deck at once and found that the weather was moderately thick. He gave the second officer orders to take a cast of the lead, and was in the act of slowing the ship down when he saw what he took to be the mast-head light of a steamer about one point on the port bow, distance from about one half to three-quarters of a mile off. The look-out man also reported the light. This was about 1.19 or 1.20 a.m.

The master, instead of ringing slow, rang full speed astern, and had the helm put hard aport, and gave three short blasts on the steam whistle. Three or four minutes afterwards, at 1.23, the collision took place, the stem of the "Winkfield" being knocked over to starboard. The captain of the "Winkfield" did not hear the "Mexican's" steam whistle or see her side-lights. The necessary steps were at once taken to save life, but it was found that with the exception of the fore peak the vessel did not make water, and every assistance was then given to the "Mexican."

The Court, having carefully considered the evidence as well as the circumstances above stated, finds as follows:

That the "Mexican's" steam whistle was sounded at regular intervals during the fog and up to the time of the collision, and that the speed was reduced to half-speed.

That the captain of the "Mexican" was justified in stopping his engines as soon as he heard the whistle of a steamer on his starboard bow until he could ascertain the course the steamer was proceeding, and that when the "Winkfield's" red light was seen the vessels were so close to each other that a collision was inevitable, and the captain of the "Mexican" acted properly in putting his engines full speed ahead and his helm hard astarboard, so as to receive a sliding instead of a direct blow.

That the captain of the "Winkfield" acted promptly when he came on deck, and that he acted properly in putting his engines full speed astern and his helm hard aport when he saw the "Mexican's" mast head light.

That every effort was made to save the "Mexican," and that the captain was justified at 5.0 p.m. in leaving the ship, and finally abandoning her.

That all the passengers were safely transferred to the "Winkfield," and under the circumstances everything possible was done to salve the mails. A portion of the passengers' cabin luggage was salved, but, for the reasons stated in the evidence, it was not possible to salve any of the luggage stowed in the baggage hold.

That the regulation lights of both vessels were burning brightly.

That we are satisfied that the "Mexican" was going at reduced speed before the collision, and that the "Winkfield," just having run into the fog, was about to reduce speed.

That the Court sees no grounds for blaming the conduct of the captains of the "Winkfield" and the "Mexican," either before or after the collision, and their certificates are returned to them.

We venture to add our opinion that the Board of Trade regulations in Article 16 of the Rule of the Road at Sea, are not sufficiently definite or explicit as to what is a moderate speed for vessels in foggy weather. 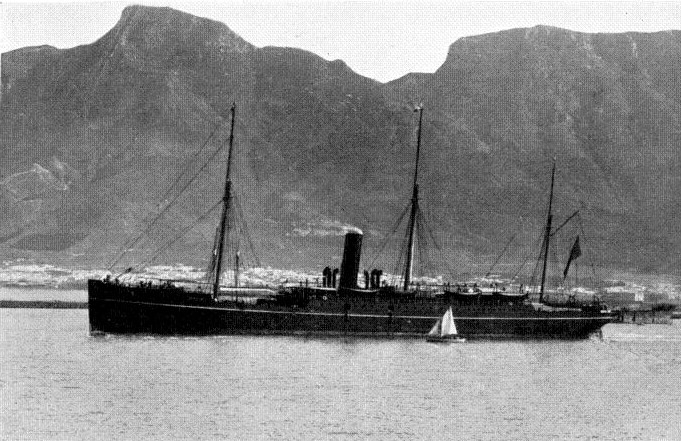 The loss of Mexican after Collision with Winkfield - 1900